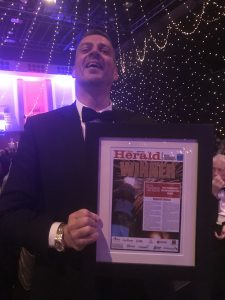 The Ryearch team was delighted to win the ‘Built Environment and Infrastructure’ award at The Herald Business Awards 2018 last night.

This category was created to “..recognise the Plymouth businesses that are making a major contribution to the city’s built environment and its infrastructure development“ which aligned with our 28 year history of delivering high quality construction and civil engineering projects across Plymouth.

The black tie event was held at Plymouth Pavilions, and was attended by nearly 450 guests from the business community, City stakeholders and event sponsors.  There was a fantastic atmosphere at the awards ceremony, which saw guest speaker Charles Hackett introducing the event and Kylie Pentelow as co-host.  The Big Noise Chorus lived up to their name and attendees dug deep for the charity Children’s Hospice South West, raising nearly £4,000.

Many of Ryearch’s projects have previously won awards, as outlined on our Awards and Accolades page, and this latest win recognises our company’s contributions to the local area as a whole.  With the two other businesses up for the award (Bailey Partnership and Burke Rickhards) being such strong contenders, it was a wonderful moment when the award sponsor – Greg Lumley from British Land – announced Ryearch as the winner.

“It was an honour for the Ryearch team to receive this award, especially as we were up against such strong competition!  I’m proud of the positive impact our construction and civil engineering teams have made to Plymouth’s built environment and to have our work recognised in this way is fantastic.

The event itself was very well executed by The Herald, and we had great fun celebrating our success with the wider team and our guests.”

The Herald Business Awards was jointly sponsored by City College Plymouth and Plymouth University.  Our award sponsor, British Land, are currently developing Plymouth’s Drake Circus Leisure, a £48 million leisure development which will feature a 12 screen Cineworld cinema, 13 restaurant units and 400+ car park spaces.  The site covers some 100,000 sq ft and is located on Plymouth’s former coach station, next to the Drake Circus Shopping Centre.  Now due to open in winter 2019, the development will create over 300 jobs for local people, in addition to construction jobs.

This website uses cookies to improve your experience while you navigate through the website. Out of these, the cookies that are categorized as necessary are stored on your browser as they are essential for the working of basic functionalities of the website. We also use third-party cookies that help us analyze and understand how you use this website. These cookies will be stored in your browser only with your consent. You also have the option to opt-out of these cookies. But opting out of some of these cookies may affect your browsing experience.
Necessary Always Enabled

Any cookies that may not be particularly necessary for the website to function and is used specifically to collect user personal data via analytics, ads, other embedded contents are termed as non-necessary cookies. It is mandatory to procure user consent prior to running these cookies on your website.