Following an interview by leading Plymouth journalist William Telford, Ryearch was featured in the business pages of the Plymouth Herald.  The piece focuses on a selection of the high quality construction projects we have delivered across the City, and our exciting plans for the future.  It also credits Ryearch for winning 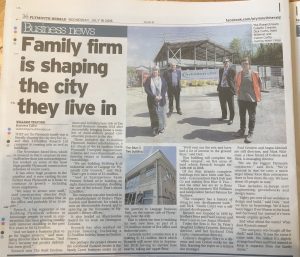 The online version of the article includes a video of our Construction Team Director, Dick Curtis, and photographs of our new head office, currently being built at Langage Office Campus.

The press article in full reads:

Family firm is shaping the city they live in

They are the Plymouth family that is literally shaping the city they live in – and their £15million Ryearch Ltd company is creating jobs as well as buildings.

The Newnham-based firm, which is unusual in that it employs its own staff rather than just contracting out, has worked on some of the most high-profile Plymouth construction schemes of recent years.

And it has other huge projects in the pipeline and is now casting its eye further than Plymouth as it looks to continue its growth – including more employees.

“We want to attract new staff,” said construction director Dick Curtis. “We’ll need another four in the office, and probably 10 to 15 on site.”

Ryearch, a big supporter of the Building Plymouth scheme to encourage people to work in construction, has been growing steadily with turnover doubling in the past five years to hit £15million.

“And we have a business plan to go for bigger projects,” said managing director Mark Wildman. “And that’s because our project delivery has been good.”

Ryearch won The Built Environment and Infrastructure title at The Herald Business Awards 2018 after successfully bringing home a number of multi-million pound construction projects in the city.

These included the £3.2million Plymouth Market refurbishment, a key chunk of the £4.5million North Plymouth Transport Improvement Scheme, and more than £4million in housing estates at Southway and Horrabridge.

“We are building 30,000sq ft of industrial units at Langage for Plymouth City Council,” said Dick. “That’s got a value of £2.4million.

“And at Yealmpstone Farm Primary School we’re building an eight classroom extension, doubling the size of the school. That’s about £2million.”

The company was also involved in the refurbishment of Drake’s Place Garden and Reservoir, for which it won an Abercrombie Award, and is sprucing up the University of Plymouth’s library offices.

It also landed an Abercrombie Award for its work on Devonport Column.

Ryearch has also worked on private housing, including a £2.3million holiday home in Newton Ferrers.

But perhaps the project closest to the combined Ryearch hearts is the Sandy Court business estate at the gateway to Langage Business Park, on the eastern side of Plympton, near the A38.

That is where the firm is building its own new base, as part of a £3.2million cluster of five office and industrial units.

Currently under construction is a 6,000sq ft, £1.1million block which Ryearch will move into in September 2018, leaving its current base nearby, taking the upper floor.

“We’ll rent out the rest and have had a lot of interest in the ground floor,” said Dick.

Of the four already complete buildings two have been sold freehold – to accountants Mark Holt and Co and holiday firm Blue O Two – and the other two are let to firms including accountants HM Williams and independent banker Balance for Business.

“The company has a history of doing its own development work,” said Dick. “Sandy Court was a self created development.”

Ryearch was founded in 1990 by brothers Peter and Paul Creaven and Peter’s son-in-law Angus Mitchell.

Collette’s mother Mary is a director and son Ciaran works for the firm, learning the ropes as a trainee site manager.

Paul Creaven and Angus Mitchell are still directors, and Mark Wildman, a close friend of Collette and Dick, is managing director.

“We are the biggest Plymouth contractor,” said Dick. “We’re unusual in that we carry a much larger labour force than contractors three or four times the size. We have about 50 people in total.”

“Eighty per cent of our workline is design and build,” said Dick. “And we have no borrowings. We’d have been bigger if we’d been to the bank and borrowed but instead it’s been steady, organic growth.”

And what about the name? What does Ryearch mean?

“The company was bought off the shelf,” said Dick. “It was the name it came with. We realise it’s slightly strange but Peter and Paul wanted to keep it separate from the family name.”